The National Association of Gay and Lesbian Real Estate Professionals (NAGLREP) is a trade organization with 35 chapters nationwide and 700 members. NAGLREP offers the only online resource that connects service providers with LGBT buyers and sellers. 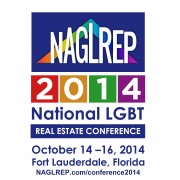 Real Estate Professionals are invited to attend and may find more information about the event at naglrep.com

The one-of-a-kind forum will focus on meeting the unique needs of the LGBT(Lesbian, Gay, Bisexual & Transgender) real estate market, and the myriad of issues that influence and impact service to these homebuyers and sellers. "Among of the factors driving the need for such a gathering is the rising tide of marriage equality measures that are rapidly sweeping the U.S. and creating enormous housing demand for thousands of now legally-joined families," said Jeff Berger, NAGLREP Founder. "And, while the implementation of new laws, and court victories are creating a tremendous amount of excitement in the LGBT community, the overall national situation is quite muddled and generating a great deal of confusion among people who are suddenly finding themselves in new and unfamiliar territory. That's where our NAGLREP members can be a great resource in their local communities."

Same-sex couples can currently legally marry in 19 states and the District ofColumbia — while 31 states have a law or constitutional amendment restricting marriage to the union of one man and one woman. Presently there are marriage cases in state and/or federal courts in 30 of the 31 states that ban marriage equality.

Additionally, according to the Dept of Housing & Urban Development and other recent surveys, despite the rapid evolution of legal status for LGBT couples, deep and persistent concerns about discrimination in the home-purchase process remain among these buyers and sellers.

The two-day intensive program will feature informative town-hall sessions, tips-filled breakout sessions, keynote speakers and after-hours networking functions including an Opening Reception, Cruise Night Out on the Fort Lauderdale Intracoastal Waterway with 400 LGBT and Gay Friendly real estate professionals, and a Night Out in Wilton Manors. The conference will resonate with the excitement of Fort Lauderdale — the number one LGBT destination in the world.

Get notified about new releases.